In Australia the BS and AS flange standards are essentially the same but have been metricated. Consequently metric sizes are stated as ‘DN’ (Nominal Diameter) in mm. Equivalent imperial sizing is rounded to the nearest multiple of 25mm (for 2” and over) as below. However the actual dimensions and bore sizes have not changed. ‘NB’ (Nominal Bore) is also sometimes used when referring to valve sizes.

The most common flanging used in Australia in oil, gas and mining is now ANSI flanging to ANSI B16.5. However in general industrial, commercial and waste/water industries AS2129 Table flanging is the most common. Increasingly European PN rated flanges are also specified in BS4504 as well as AS4331 and EN 1092-1. BS4504 is now obsolete and is replaced by EN 1092 which is listed in British Standards as BS-EN 1092. EN 1092 evolved from DIN 2501 which became part of ISO 7005, then EN 1092 was created as the standard for DIN based flanges. (BS4504 flanges were generally the same as the old DIN 2501 specification, but the new EN 1092 standard covers a wider range). EN 1092-1 is for steel flanges, EN 1092-2 is for iron flanges, EN 1092-3 is for alloy flanges, EN 1092-4 is for aluminium alloy flanges. PN stands for Nominal Pressure and roughly equates to the number of bar i.e. the cold working pressure of PN10 is 10 bar. Ratings range from PN2.5 to PN420. The latest Australian standard AS4331 references this rating system (PN2.5 to PN420). AS4331 is a reproduction of ISO 7005 which is based on the American and European flange systems PN20, PN50, PN 110, PN 150, PN 260 and PN 420 steel flanges are “designed to be interchangeable” with flanges to American standards ANSI/ASME B16.5 and MSS SP44; they are not identical but are “deemed to comply” with dimensions specified in ANSI/ASME B16.5 and MSS SP44 as appropriate.

ISO 7005 (which AS4331 is a reproduction of) also includes European DIN flanges PN6/10/16/25/40 which were previously DIN 2501-1 and BS4504.  These flanges are the same as EN1092 but EN1092 also includes higher rated DIN based flanges. Consequently in Australia most users simply just reference to original ASME B16.5 standards as this is already in use in Australia for the Oil, Gas and Mining industries and in fact in pressures above table E it has been the predominant standard in use for the last 30 years. However, piping engineers must refer to the new AS standard AS4331 for interpretations and specification requirements. Note in the case of AS4331.1/ISO 7005-1 ANSI equivalents they are not absolutely identical to ANSI but “deemed to comply and are designed to be interchangeable”.

Piping Class Ratings based on ASME B16.5 and corresponding PN rating: –

PN is the rating designator followed by a designation number indicating the approximate pressure rating in bars.

PN ratings do not provide a proportional relationship between different PN numbers, whereas class numbers do.

AS2129 originates from BS10 and has been metricated. In some cases slightly larger bolt holes provide better clearance as metric bolts are specified in lieu of UNC bolts used by BS10. AS4087 is an update of AS2129, however AS2129 is still widely used so it has not been deleted as a standard, however, it now only covers AS table D to H.

Although the standards say they are identical, I notice some very minor flange thickness differences between ISO 7005 (AS4331) and EN1092. Refer the Global Supply Line online slide rule above for differences.

AS 4331 is a reproduction of ISO 7005 which is based on the American and European flange systems. PN20, PN50, PN110, PN150, PN260 and PN420 Steel flanges are “designed to be interchangeable” with flanges to American standards ANSI/ASME B16.5 and MSS SP44. They are not identical but are “deemed to comply” with dimensions specified in ANSI/ASME B16.5 and MSS SP44 as appropriate.

Although the standards say they are identical, there are some very minor flange thickness differences between ISO 7005 (AS4331) and EN1092. Refer the Global Supply Line online slide rule above for differences.

API6A flanging is used in Australia in oil drilling and wellhead systems. (see our oilfield slide rule click here. API ratings range from 2,000 to 20,000 psi (cold working pressure). ANSI was originally born from API, consequently in class 600 to 900 and 1500 ANSI the flanges are dimensionally equivalent to API 2,000, 3,000 and 5,000 in most sizes to ANSI 300NB (12”) API 13 5/8” but ANSI flanges being manufactured from lower yield strength carbon steel are rated to lower working pressure. However GSL stocks high yield carbon steel API6A 45K weld neck flanges which are compatible with ASME A234 WPB fittings and A106B/API5LB pipe. Click here to find out more.

ASME (American Society of Mechanical Engineers, of which Australian Pipeline Valve is a member company) is a group of standards, which are in turn covered within the American Standards Institute (ANSI), hence their flanges can be referred to as ANSI or ASME class. Class is also traditionally abbreviated CL or LB (verbally spoken as pound) or cross hash (#) but not psi as this can be misconstrued as the cold working pressure (CWP). Since ANSI 150 for instance has a CWP of 285 psi, so unlike the PN system the class is not related to CWP. AS4331 has adopted ANSI drilling and sizes but uses PN rating classes. Consequently in some sizes flanges are thicker to bring the rating up to the required PN rating.

Forged steel flanges, ASME B16.5, are made in seven primary ratings:

The Pressure Class for flanges is often expressed in ‘pounds’. Different names are used to indicate a Pressure Class. For example: 150 Lb or 150 Lbs or 150# or Class 150, all mean the same. 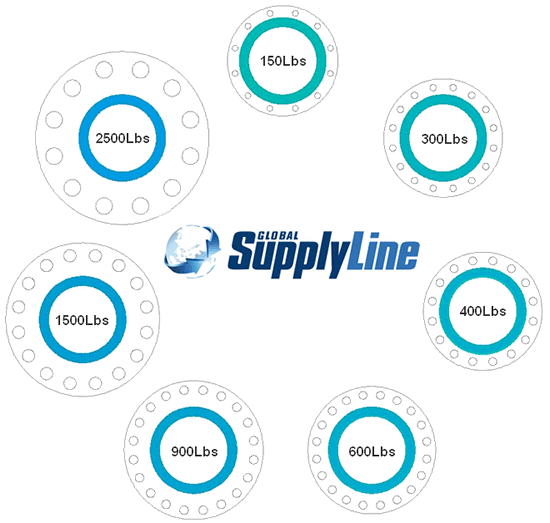 Pressure/temperature ratings are maximum allowable working pressures allowed as per ASME B16.5 (published in metric and imperial). For intermediate temperatures, linear interpolation is calculated by manufacturers.

Pressure-temperature ratings apply to flanged joints which may be reduced by gaskets or studs used.

The below two tables are examples of two material groups according to ASTM, flange pressure-temperature ratings to ASME B16.5 – 2009.

LB is the origin of the Latin word Libra (weighing scale) a Roman unit of mass similar to a pound, hence this has been adopted as another way of saying Class. Never say PSI as this can be confused with API 6B flanges which are rated by PSI (CWP).

Ask our salesman to post you an ANSI Slide Rule